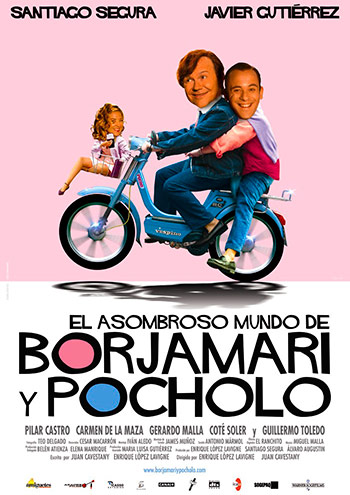 On one of those endearing and innocent Madrid nights in the 1980s, Borjamari and Pocholo are in their element in the Aguacates nightclub. Fond of playing practical jokes on the “chicks”, they rule the roost with their cocky self-confidence.

Twenty years later, nothing has changed. Except that now Borjamari and Pocholo are nobodies at Aguacates; nothing but the object of derision and mockery.

Borjamari notes that he and his brother Pocholo are going through a “mega-important moment.” He senses that something is happening to him on a personal level. If only he could put his finger on what it is… Maybe it has something to do with Piedad, his former platonic love, who is now happily married and with children, while he still gets around on his Vespino moped with his little brother. The latter, meanwhile, is still floating around in his cloud of pure innocence, which leaves him prey to the capricious cruelty of his brother.

For both, the reality that surrounds them is “really amazing, I mean, you know?”. One day their cousin Pelayo, whom they used to laugh at and emotionally abuse when they were kids, reappears in their lives, and the two brothers are in for a big surprise. Pelayo has gone from being a posh little boy with glasses to being a modern extreme skier, very popular and a real womaniser. Pelayo did not miss the train. And now he takes advantage of the opportunity to avenge the past cruelty of his cousins.

Pocholo and Borjamari believe a story that Pelayo tells them and embark on an adventure which means travelling from their neighbourhood of Salamanca in Madrid to Guadalajara (the longest, and also the only, journey they have ever undertaken). They are accompanied and aided by Paloma, a “chick” who is in the process of becoming a “woman,” who comes into their lives by surprise and brings the keys to Mummy’s car with her. To be clear about things, Paloma is the female equivalent of Borjamari and Pocholo. Even as she seduces them, Paloma surpasses them in all-round stupidity.